We’re building a new intranet, and we’re running the project in an Agile fashion – we work in 10 day (two week) ‘sprints’ and then demonstrate the actual systems to stakeholders, end-users and, well, anyone with an interest. 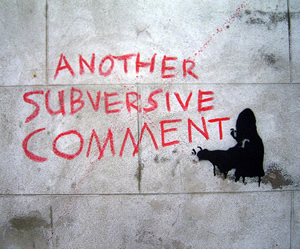 These demos are called ‘show n tell‘ sessions, and it’s usually me showing the new intranet on a big screen, highlighting functionality, explaining benefits and then taking questions.

I wonder if, for new systems, change programmes and other internal comms matters, we could flip ‘show n tells’ into ‘see n say‘ sessions.

Because people are often reticent about voicing their opinions (around here, people fear being wrong so very much that they’d rather share their thoughts with their trusted friends rather than out in the open) so getting feedback from people would need to be facilitated.

I wonder if you could just leave the system available to people, and let them use paper notes, a whiteboard or just brown paper on the wall to scribble their comments, queries and concerns.

Maybe the facilitator could be on hand to answer queries directly and record them.

A ‘see n say’ session might not demonstrate all the features I’d want a person to see, but it would allow the person to explore in their own way, and get hands on experience of the new system, rather than sitting / standing in the audience and being passive.

As is often the case, communications can overly focus on “what I want to tell you” rather than listening to people and learning ‘what they want to know’ and ‘need to do’. Maybe more informal comms could have a focus on enabling easy feedback in a kind of ‘see n say’ format.

If you're new here, you may want to subscribe to my RSS feed.
June: Pride month! Stonewall was a riot.
Black trans women started a revolution. Black lives matter.
Thanks for visiting!

If you're new here, you may want to subscribe to my RSS feed.
June: Pride month! Stonewall was a riot.
Black trans women started a revolution. Black lives matter.
Thanks for visiting!