User experience as a core function of design (getting it wrong)

Too often I see new technology being implemented in design purely because it is the new toy for the engineer to play with, or it allows the owner to proudly proclaim that they have moved into web now+1. 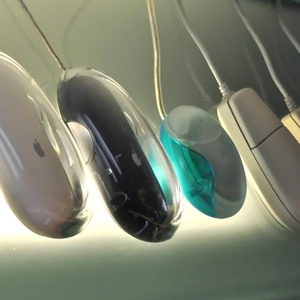 On the other hand we often see design decisions doggedly stuck to, not because they create a better solution, but because it’s the way it has been done for ages, or because it’s different to the competition.

It would be churlish to claim that nothing good ever comes from these philosophies, but our enthusiasm for the new should always be tempered with careful consideration on what exactly that design decision will bring to the table: For every Macintosh Desktop triumph, there are countless Apple USB Mouse disasters.

Non-business users loved the Macintosh desktop metaphor. It was new, and it was different. It was also a really good user experience, which is why for a short while Apple ruled the roost when it came to personal computing. They won because they looked at the way things were done, and asked how they could make the entire experience better for the average computer user who didn’t want to memorise keyboard commands, and who didn’t always know how to start a program when staring at a blank screen with a flashing input cursor.

However, it didn’t matter if you were a business or personal user; the Apple USB Mouse (also known derisively as “The Puck”) was a design disaster: It was too small, the wrong shape, and in an era where most users wanted two mouse buttons, it doggedly stuck to the single button design of the last decade. It had an abnormally short cable, which wasn’t a problem in itself as it was designed to plug into the hub on the keyboard, except that it meant only left handed users could use the mouse normally on their laptops due to a change in the placement of the ports.

All in all, it was a design disaster as the user experience was thrown out in favour of being different from everyone else, but simultaneously refusing to deviate too heavily from what they had previously established as being iconic to the Apple brand, even to the detriment of overall functionality, and flying in the face of over a decade of advancements in technology, user experiences and user expectations.

Since Bill Gate’s departure from Microsoft, Apple seem to have found themselves a new nemesis in the shape of their former partner Google, and it would be fair to say that like Apple, Google have also made some basic errors when it comes to designing around the user experience: Some time in 2005, Google launched a service named “Google Personalized Homepage” in response to the personalised web portals that Yahoo! was offering. By and large, Internet users didn’t care too much since what they really wanted from Google was the ability to return search results quickly, and for them to be presented in a useful format. Some of us were trying hard to get onto the Gmail beta, but the average adult user of the internet did not care about this new hub experiment.

Come 2007 they had re-branded as iGoogle, and it had really started to take off. Unfortunately, they later decided that during an upgrade of the service, the tabs across the top of the screen were not where they wanted to be going design wise, and forced users to switch to a left navigation bar. This unfortunately reduced the availability of valuable screen real estate, and started a running battle with users who would find workarounds to return to the tabbed version almost as fast as Google would close them down. It was a design disaster, as the usability and accessibility were negatively impacted, but they stuck to their guns. It was their baby, and usability be damned.

Their design decisions are a perennial sore spot for their users, and for a company that is supposed to be about freeing data, they have a tendency to lose it in their interfaces and overall user experience. They let engineers design, and I could be forgiven for thinking that they don’t really seem to be overly concerned with making sure that actual designers have had at least one run through on the end product.

If you take only one thing away from these cautionary tales, please let it be that it doesn’t matter how fancy your code, how flashy your graphics, or how fabulous your widgets; if it doesn’t improve the experience for the end user, it shouldn’t be there. These things are tools; use them as such. Not as crutches.

Nathanael is a professional artist, working in a visual communications field. Amongst his many jobs are interface design and marketing materials where he has to evaluate who the end user is, and who the target audience is. You can find his details on LinkedIn.

Nathanael Rouillard is a full time artist who rarely gets any time to produce any art outside of his office. He spends most of his free time playing games of one variety or another, and attempting to watch as much high quality film and television as possible. He tries to indulge an interest in amateur photography, but spends more time thinking about what stylistic choices he should make than actually attempting any pretty pictures. Besides which, he will see beauty in things where others see only ugliness. This probably explains his occasionally dark sense of humour.

An alphabet of accessibility issues