Twenty words, not too many polysyllables

‘Polysyllables’ aside, it’s simple to make our communications easy to read – and retain greater impact – with one or two basic rules.

Write for your audience, not for your boss

Your stakeholders can trap your comms in endless review cycles, unless you demonstrate your expertise.

The intranet dump and how to rise above the pabulum

Relevancy and usefulness are the keys – good communications should not only be interesting to people, but influence their behaviour as well.

I’d just like to share my practice for ghost writing for senior managers; and confess some of my sins.

Forget ‘news’; reference pages is where it’s at

Every department or project desperately wants front page headlines on the intranet to drum up interest. But news is ephemeral; it’s the permanent reference pages that will inform and educate the audience the most.

To make content valuable, we need to focus articles and communiqués to match the organisation’s objectives and meet the needs of the audience. By considering the long-term goals of content, we can keep the intranet, and other channels, task focused and people-centred.

A good summary is your best communication

Wouldn’t it be awesome if you could beam information directly into people’s minds?

Choosing between the stakeholder and the audience

Stakeholders can supply focus and drive, but their personal lens can warp the clarity of communications.

Much as I would like all intranet pages to be ‘perfect’, I find it useful to recognise four standards of intranet page.

To be honest with you…now that’s a phrase you hear too often, and I’m sure I’m guilty of it myself at times. How ridiculous though; does it mean that at any other time you’re not being honest with me?! 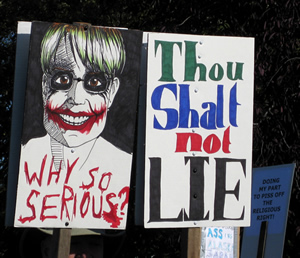 How much do we trust in what we read? Trust and truth go hand in hand, so if we read something we later discover to be untrue, we lose trust in that particular source. If a website publishes something that isn’t true, even a seemingly small and trivial thing, we are unlikely to trust anything within that site. The same goes for any other communications, including marketing, which can have serious consequences for businesses and brands.

“Whoever is careless with the truth in small matters cannot be trusted with important matters.”
Albert Einstein

There’s such a thing as too much honesty

Of course, being truthful doesn’t mean one has to tell the whole truth, and it’s important to be discerning when communicating, especially if it’s to a wide and powerful audience.

Take Gerald Ratner, Chief Executive of a highly successful jewellery empire during the 80s. Everyone knew Ratners was a budget chain, and that was the reason for its success. That is until Mr Ratner decided to be too honest and announced to the Institute of Directors that:

“People say, ‘how can you sell this for such a low price?’

That single comment, despite being something consumers already really knew deep down, destroyed the chain’s reputation overnight, and the company almost collapsed.

Most people consider themselves to be honest, and I think that the majority of us are naturally and instinctively honest, even if we don’t necessarily mean to be! It is said for example that a novelist’s first book almost always contains a great deal of autobiographical truths – even if they are cleverly, and perhaps unknowingly, disguised.

We can use the same approach for communicating sensitive or volatile information. It’s not always appropriate to be completely blunt, but by hiding a harsh truth within carefully crafted words, we can get the message across gently, minimising any negative reaction and enabling the reader to digest and reflect on the information more positively.

“The truth is never pure and rarely simple.”
Oscar Wilde

There are very few absolute truths. The majority of what we read is at least loosely based on personal opinion. Some things of course are facts, but we must be careful in our communications to ensure that our opinions are not portrayed as such. When we say “I think…” or “in my opinion…” we are letting our readers know that they can trust us. We are saying we may not be certain of the absolute truth, but this is an idea for them to consider.

People often respond better to ideas than they do to facts. They don’t always appreciate being told something, but ideas give them the freedom to think for themselves. Such careful comms can manipulate people into agreeing with you – by giving people a truth in the form of an idea, you are allowing them to think for themselves, enabling them believe that your idea was in fact their idea all along.

So, if we expect to be able to believe what we read, then we also have a duty to ensure truthfulness in what we write. In order to gain the trust of our readers and build a reputation for being a valid source of information, we must rely on truth at all times.

Jules is an executive PA and also runs the largest eraser emporium in the world (AFAIK) and you can find out more at originalerasers.co.uk Jules manages FirstSigns with me, and is a keen writer with an eye for detail like an electron microscope.

Your comms are boring

How can our communiqués compete with a world that knows how to engage people’s attention? Couldn’t our internal communications be, y’know, human and interesting?

I read an article in The Guardian on the art of slow reading, and how skim reading on the Internet may have made us more stupid. But I think the same could be said for writing. 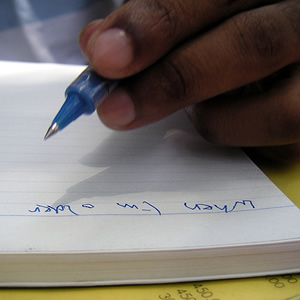 I was just sitting outside with a pen and paper, thinking how much I enjoy the physical act of writing; of actually allowing a real pen and ink to form the words. I considered how writing by hand is slower than typing, but how it also requires so much more thought.

Of course I’m now sat at my computer, typing away frantically. The words appear on screen almost faster than they arrive in my head – hence the need for continuous backspacing. I hit the backspace key more frequently than I press the space bar. I kinda know what I’m saying, but I haven’t planned it in too much detail and I don’t yet know how it’s going to end. But none of that matters; with a little deleting, cutting, pasting and inserting I’ll have it done in no time. But how much skill and thought will I have used, compared to if I had written it by hand?

Writing anything by hand, but especially something of decent length such as an essay or article, takes a great deal of thought. Unless you want a page covered in Tippex (do you remember that stuff – does it still exist?!) then each word has to be carefully planned beforehand. The whole structure of the piece needs consideration before you even begin, and each paragraph, sentence and word must be considered. There’s little room for mistakes, and there’s no chance of your pen overtaking your brain.

I’m sure anyone born in the same decade as me will remember school and college days of writing everything by hand. I wonder if we learnt more as a result. They say we take in more of what we write than what we hear or even read, and I’m pretty sure we learn more by writing about something than by typing about it.

I’m certain that physical writing allows a person to really know and feel what they are saying, in a way that just isn’t necessary when typing. Typing is lazy writing, and can almost be secondary to other thoughts going on in the head – my fingers can keep moving across the keyboard while I also decide what to cook for dinner. I’m not capable of such multi-tasking when writing by hand, when my focus must remain purely on the words.

I also think we give up far more easily when typing. I’ve got so many started and casually abandoned articles on my computer, because giving up on half an hour’s work doesn’t seem too much of a big deal. But if you’ve spent four hours lovingly applying ink to paper, I think you’re less likely to give up on it and throw it away, never to be touched again.

My hands have been motionless for several seconds now, lurking mid-air over the keyboard while I ponder with satisfaction the full page of words in front of me. Such a pose, no doubt with a somewhat vacant expression on my face, tells me I’ve probably run out of words and should bring this thing to a close now.

So if you’ve quickly skim read parts of this frantically typed article, do let me know if you feel any more stupid than you would had you slowly read a handwritten version of the same thing.

Jules is an executive PA and also runs the largest eraser emporium in the world (AFAIK) and you can find out more at originalerasers.co.uk Jules manages FirstSigns with me, and is a keen writer with an eye for detail like an electron microscope.

I don’t always get it right, and it’s not always “someone else’s fault”. Miscommunication is a serious matter, and yet mistakes will happen.

Tired of Senior Engineers telling you they’d prefer the second sentence in your article to end with a smiley face? Want managers to let you shape messages as per your remit? Try this radical idea!

It’s something about being authentic, clear and concise yet thoughtful and human

Love of the written

We bandy the word ‘passion’ around too much, but love of the λόγος (logos) should drive our written expressions.